Women and the Family
Key question
How and why was the role of women changing in society in the early twentieth century?
The first quarter of the twentieth century witnessed two important social changes in German family life: between 1900-1933 Germany’s population growth had decelerated markedly. Over the same period female employment expanded by at least a third, outstripping the percentage increase in population. Both of these trends had been partially brought about by long-term changes in social behaviour common to many industrialised countries.
It was recognised that the use of contraception to limit family size would improve the standard of living and give better educated women the opportunity to have a vocation as well as children.
Germany’s recent history exaggerated these developments.
Women entered the factories in WW1, while the post-war difficulties caused by inflation had encouraged them to stay working, out of economic necessity. The war had left a surplus of 1.8 million marriageable women, as well as many wives with invalided husbands.
The changing balance of the economy in the 1920s had led to an increased demand for non-manual labour and the growth of mass-production techniques requiring more unskilled workers. These factors tended to favour the employment of women, who could be paid less than men. 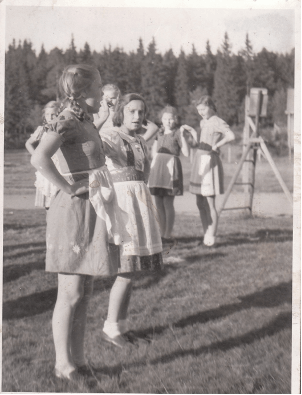 The Nazi view towards women
Key question:
What was the ideal role of women in Nazi society?

Base answer:
A women’s place was in the home

The ideology of National Socialism was in contrast to normal social trends. Nazism fundamentally opposed social and economic female emancipation and had the following aims for women:

• To have more children and to take responsibility for bringing them up.

• To care for the house and their husbands.

• To stop paid employment except for very specialist vocations such as midwifery.

In the view of the Nazis, nature had ordained that the two sexes should fulfil different roles, and it was the task of the state to maintain this distinction. As the Nazi slogan presented it, they were to be devoted to the three German Ks: ‘Kinder, Küche, Kirche’ (‘children, kitchen and Church’). Such dogma was upheld by the party, even before 1933 – there was not a single female Nazi deputy in a Reichstag position.

The Nazi “ten commandments” for the choice of a spouse

A growing population was viewed as a sign of national strength and status.

However, the population was declining. If the number of Germans was levelling out, how could they demand nationalist expansionism in eastern Europe (Lebensraum)? It was important to increase the population greatly and, to achieve this, women were portrayed as primarily the mothers of the next generation – an image that suited Nazi anti-feminism.

Female Employment
Key question:
Did the Nazis reduce the number of women in employment?

Base answer:
Yes, economic necessity forced more women into the workplace Initially, attempts to reduce the number of women in work were quite successful. Between 1933 and 1936 married women were in turn debarred from jobs in medicine, law and the higher ranks of the civil service. Moreover, the number of female teachers and university students was reduced – only 10 per cent of university students could be female.

Nazi incentives
In other sectors of the economy a mixture of party pressure and financial inducements was employed to cajole women out of the workplace and back into the home. Interest free loans of RM600 (RM were Reichsmarks, the Nazi currency) were made available to young women who left work to get married.

The effects of the Depression also worked in favour of Nazi objectives - the Depression
enabled the government to justify its campaign for women to give up work for the benefit of unemployed men.

Nazi women’s organisations
Women were specifically excluded from Nazi government. The only employment opportunities available to them were within the various Nazi women’s organisations, such as the National Socialist Womanhood (NSF, National Sozialistische Frauenschaft) and the German Women’s Enterprise (DFW, Deutsches Frauenwerk) - both tools for the propagation of the anti-feminist ideology through cultural, educational and social programmes.

There she is - the perfect German housewife and mother, helping only in social organisations.

There were problems though.

Effects
By 1937 Nazi ideological convictions were threatened by the pressures of economic necessity.

The introduction of conscription and the rearmament boom from the mid-1930s soon led to an increasing shortage of labour, as the Nazi economy continued to grow.

The anti-feminist ideology could only be upheld if economic growth was slowed down, and that would restrict the rearmament programme.

Market forces inevitably began to exploit this readily available pool of labour, and the relative decline in female employment was reversed.

Between 1937 and 1939 the percentage of women in work increased from 31 per cent to 33 per cent of the total workforce.