The gold discovery wrought immense changes upon the land and its people. California, with its diverse population, achieved statehood in 1850, decades earlier than it would have been without the gold.

In the cold morning hours of January 24, 1848, James Marshall, a construction foreman at Sutter’s Mill, was inspecting the water flow through the mill’s tailrace.

The sawmill, on the banks of the American River in Coloma, California, was owned by John A. Sutter, who desperately needed lumber for the building of a large flour mill.

On that particular morning, Marshall not only found the water to be flowing adequately through the mill, but also spied a shiny object twinkling in the frigid stream. Stooping to pick it up, he looked with awe at a pea-sized gold nugget lying within his hand.

He immediately went to visit Elizabeth Jane “Jennie” Wimmer, the camp cook and laundress, who had grown up in a prospecting family. Ms. Wimmer used a lye soap solution overnight to verify that the 1/3 ounce nugget Marshall had found was true gold.

Dubbing it the Wimmer Nugget, which was later appraised at $5.12, Marshall gave it to her on a necklace. It would later be displayed at the Columbian Exposition of 1893. 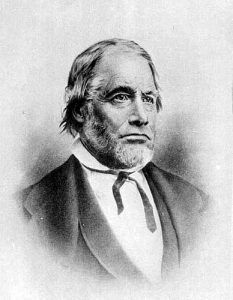 Marshall then informed his boss, John Sutter, of his find. Sutter, a German/Swiss immigrant who owned thousands of acres around the Sacramento and American Rivers, had dreams of developing part of his land into a utopian farming settlement named “Nuevo Helvetia” (Spanish for “New Switzerland”).

His main compound was known as Sutter’s Fort and had already become a destination for immigrants, including the Donner Party. More concerned with expanding his agricultural empire, Sutter wished to suppress the information about the gold.

But such a secret was too big to keep hidden, and before long, a San Francisco newspaper confirmed reports of several gold finds in the area and miners began to flock to the area turning it from a sleeping outpost to a bustling centre of activity.

Even with the crudest of mining tools, the earliest miners did well. All one had to do was to dig down into a placer, and wash the pay dirt. The entire gold country was open to all. No taxes were levied on what the miners found. No towns or roads existed in the gold country. Every miner was on his own, and nobody had to work for wages unless he wanted to.

On August 19, 1848, the New York Herald was the first newspaper on the East Coast of the United States to confirm that there was a gold rush in California. By December 5, 1848, even President James Polk would announce this before Congress, significantly legitimising the news.

News of gold, free for the taking, continued to spread.

By the end of summer, the first gold seekers were arriving from outside California. The first immigrants were probably from Oregon, where American farmers had been settling since the early 1840s. Next came men from the Sandwich Islands (now Hawaii). In the autumn, new arrivals were coming from northern Mexico, and during the winter large numbers came from Peru and Chile in South America. Still, there was plenty of gold for all, and fresh discoveries were made daily. The immense extent of the gold deposits was becoming clear.

As he predicted when he saw the gold nugget, John Sutter was ruined as more and more of his agricultural workers left in search of gold, squatters invaded his land, shot his cattle and stole his crops. Sutter described it this way: “Everyone left, from the clerk to the cook, and I was in great distress.”

Though the great majority abandoned their other activities to search for the precious metal, one enterprising Mormon merchant named Samuel Brannan had a better idea. He bought all the mining supplies he could find and filled his store at Sutter’s Fort with buckets, pans, heavy clothing, foodstuffs, and similar provisions. Then he took a quinine bottle full of gold flakes to the nearest town, San Francisco.

There he walked up and down the streets, waving the bottle of gold over his head and shouting “Gold, gold, gold in the American River!” The next day, the town’s newspaper described San Francisco as a “ghost town.” Samuel Brannan quickly became California’s first millionaire, selling supplies to the miners as they passed by Sutter’s Fort.

To California during the gold rush.

The gold discovery sparked almost mass hysteria as thousands of immigrants from around the world soon invaded what would soon be called the Gold Country of California. The peak of the rush was in 1849, thus the many immigrants became known as the ’49ers.

Some 80,000 prospectors poured into California during that year alone, arriving overland on the California Trail, by ship around Cape Horn, or through the Panama shortcut. The majority of them came in one immense wave during mid-summer, as covered wagons reached the end of the California trail. At the same time, sailing ships were docking in San Francisco, only to be deserted by sailors as well as passengers.

Digging for gold from early dawn until dusk was backbreaking work. The hope of “striking it rich” became an obsession with many of the Forty-Niners. Stories of others who had found their fortune in gold kept driving them on. A streak of bad luck could always be followed by a rich strike.

Miners prospecting
by Frederic Remington
By the 1850s miners were coming from places all over the world — Britain, Europe, China, Australia, North and South America. However, the gold was getting harder to find and competition grew fierce between the miners. At the same time, merchants raised the prices of mining tools, clothing, and food to astronomical levels. 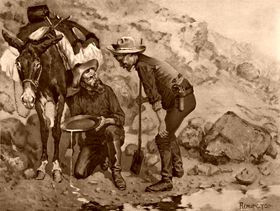 A miner had to find an ounce of gold a day just to break even. Most miners barely found enough gold to pay for daily expenses. Nevertheless, it was among the most important eras of migration in American history and led to statehood for California.

As miners continued to invent faster, more destructive methods of finding gold, the land was ravaged. Hillsides were washed away in torrents of water, and towns downstream were inundated by immense floods of mud. Water supplies were poisoned with mercury, arsenic, cyanide, and other toxins. Grand forests of oak and pine were levelled for mining timbers.

The gold discovery wrought immense changes upon the land and its people. California, with its diverse population, achieved statehood in 1850, decades earlier than it would have been without the gold.

The peak production of placer gold occurred in 1853. Every year after that, less gold was found, but more and more men were in California to share in the dwindling supply. Thousands of disillusioned gold seekers returned home with little to show for their time and glad to escape with their health.

After the boom, many miners returned to San Francisco, rich or more often broke and looking for wages. Like many cities of the 19th century, the infrastructures of San Francisco and other boom towns near the fields were strained by the sudden influx; leftover cigar boxes and planks served as a sidewalk, and crime became a problem, causing vigilantes to rise up and serve the populace in the absence of police.

Other miners, instead of returning home sent for their families, turning to agriculture and other businesses as a way of survival.

The California Gold Rush is generally considered to have ended in 1858 when the New Mexico Gold Rush began. Afterward, the hearty pioneers of California found the land unbelievably productive, and ultimately the state’s great wealth came not from its mines but from its farms.

This site was started with Mobirise site themes