When you have a dictatorship, there is one thing you need to make sure of - or it all falls apart.

What that one thing might be?
You have to make people feel they all belong to the group.

For example, in the dictatorship of China, everyone has a Chinese Communist Flag, and waves it when told. They all swear allegiance to the dictatoship, they march all in time together on parades celebrating the dictators of the past and present. The same happens in all dictatorships - North Korea and it used to happen in Soviet Russia too.

Houses have flags outside or inside, pictures of their dictators, the national colours are displayed and used far more than any other. (Picture 1)

What does this make the people feel?
Part of the group.

In Nazi Germany, Volksgemeinschaft was promoted as being the most important thing.

So what exactly is it? It is made up of a few separate but linked ideas, all designed to give the German people a feeling that they had a common history and that they all belonged to the ‘same’ Germany. We know that most countries have different regions, different customs and ways of doing things.

Naturally they are all fairly similar, but there are differences.

What made up ‘Volksgemeinschaft’?
One of the central ideas was ‘social Darwinism’.

What did Charles Darwin suggest as his main theory?
Evolution - survival of the fittest.

In Germany though, the Nazis promoted the idea that there was a certain race of people who were far and away better than all the rest of the world.

What was the name of that ‘race’?
The Aryans.

Is this a real race of people?
No. Scandinavian people tend to be blond haired, often with blue eyes but that’s not a race, it’s just a genetic group.

But crippled little Minister of Propaganda Josef Goebbels (picture 4) - himself small and really not well built at all - told everyone that the ‘Aryan Race’ was made up of Germans and they were simply the best in the world.

So how did he get everyone to believe that the Aryans were best?
Propaganda! (Pictures 5-8.)

He was very good at propaganda. The German people, you will remember, were going through a very bad time and so they wanted to believe that something was good in their lives - and Goebbels telling them that they were the superior race was just exactly what they wanted to hear.

Quite quickly, they believed it. They genuinely thought they were the best race of people in the whole world and therefore, because they were best, should run the world. That suited Hitler very well, because of course on his own - or even with his Nazi party - he couldn’t challenge the world.

With the people behind him, supporting him all the way, Hitler was able to break the Treaty of Versailles and build up his forces. All because of this untrue theory of ‘social Darwinism’.

The next aspect of Volksgemeinschaft was Anti-Semitism (pictures 9-12). A ‘Semite’ is simply another name for following the Jewish faith. Jews are not a race of people, they are just a group who believe a certain thing. Just like Buddhists do, Christians, and all the other religions.

Hitler’s Nazis needed someone to blame for the badness that was happening in Germany in the 1920s and 1930s. Sadly, once again, the Jews became a target. This has happened throughout history; the ethics of the faith can mean that Jewish people work hard and because of that, make lots of money. This money acts as a cushion in bad times.

Of course, with Goebbels doing the propaganda, the German people soon started to believe that yes, the Jews were to blame for all the lack of jobs, the poverty and the bad state of Germany. But why would they? Simply because people have a need to blame someone for troubles that they didn’t cause and cannot fix on their own.

The next central part of Volksgemeinschaft is Führerprinzip (pictures 13-16). The two parts of the word are ‘fuhrer’ and ‘prinzip’. Many German words join together to make one long words out of a few meanings - just like Volks (people) gemein (togetherness) schaft (nation).

Führerprinzip says that the Führer (leader, president and prime minister) has the right to lead the country, a right given by God Himself. So, Führerprinzip meant that Hitler was God’s man to lead Germany to victory over the world.

Again, with the help of Goebbels, and all his propaganda, the German people really believed that Hitler was so important that God had made him the leader. Pure nonsense of course, but that’s what propaganda can do. And the German people needed not only a scapegoat (the Jews) but someone to lead them (Hitler).

Up to now we have social Darwinism telling the German people that they are better than anyone else, anti-Semitism, and Führerprinzip.

Next we have the unification of all Germany (Picture 16). You might think that, well, they are already all German, but that’s not quite what it means. In reality it meant that all the differences in areas, or provinces, should be smoothed out and pretty much all of Germany should follow the same traditions and customs. Small differences were allowed, because they indicated the great diversity of Germany as well.

Goebbels went to work yet again and persuaded the German people that although they had differences, they were part of the ‘whole’ Germany and should be together ‘as one nation’ and that would mean they could conquer the world!

They heard it, wanted to believe it - so they DID believe it.

The unification of Germany also aimed at getting rid of the class and social divisons in Germany - making all the great German superior people equal.

There are social classes even today: the rich, all the way down to the poor. It is not a popular thing to say these days, but there are social divisions based on money and possessions.

The unification tried to get rid of all that - but failed very much. Some ideas are easy to change, some are not. Even with the power of Goebbels, people still knew that if they were rich, they were certainly not the same as a poor person living under a bridge.

So Goebbels was not always successful - but in most things, he was.

After the unification of Germany, comes another German word - Lebensraum (picture 17).

It literally means ’space to live’.

Germany then (and now) is a large country, with lots of room. What does it mean in the context of the Nazis?

For the Nazis it meant gathering together all the countries which spoke the German language - and ignoring the fact that there were German speakers in many countries all around Germany itself.

A fairly dangerous concept. That’s because it meant that Hitler - supposedly God’s man on earth - had the absolute right to annex land or even countries around Germany simply because they spoke German.

The next concept is that of ‘traditional Germanic values’.

What is this?
It’s actually another false thing that the Nazis wanted the German people to believe.

The German people were told that traditional Germans came from hard working agricultural people - sons and daughters of the earth, dedicated to working the land to produce food in plenty for the country so everyone lived well. Another part of it was that Germans were supposed to have a common belief in God - not bothering about being Roman Catholic, Protestant or Lutheran or any other denomination.

In reality, the Germans were diverse in their beliefs and always had been. It is that diversity which actually gives strength to a people, not common (the same) beliefs.

In English it means ‘blood and soil’.

It was another attempt to convince the German people that they came from the land, that they had traditional beliefs and values and in fact were able to go back to the centuries-old traditions of a rural society, but in a modern setting.

The trouble is that Germany had never been a rural society and had very few of the values that the Nazis were trying to tell them that they had!

Most societies come from an ancient agricultural beginning, which later becomes ‘rural’.

What is the difference between ‘agricultural’ and ‘rural’?
It’s only really a small difference to do with development. An ‘agricultural society is mainly composed of people working on the land; and a ‘rural’ one is where there is a mixture of agriculture and more advaced industry.

The idea, was, again, to persuade the Germans that they had an honourable and traditional history going back many many centuries and that they should bring back their value of those beginnings.

Did this work?
Well, actually it pretty much did work. The Germans began to believe that they had this mythical history, of great traditions, heroes and almost like Greek gods and goddesses.

In truth they really didn’t have that background.

Gender roles (pictures 21 and 22) were increasingly separated in Nazi Germany. They were supposed to come from a strongly agricultural history, and people really in those ancient times did things differently to how modern society was doing things.

What that means is, in ancient times, men did the work and women did the cooking. In ancient times that might have been true. In modern times of course it is not. In Nazi Germany though, they concentrated on trying to make men the ‘breadwinners’ - literally the workers who were paid and brought bread home - and women were to be the 'home-makers', as they’re called today.

Now, there’s nothing at all wrong with men doing jobs and women staying home, but equally, there is absolutely nothing wrong with women working and men staying home. However, the so-called ‘traditional’ values were - men work, women make the home nice for the man to come home to. And of course - women were supposed to make babies (with the help of the husband).

Not only, then, were men to work and women stay home, but families were supposed to be large and all blond haired and blue eyed.

(This blond hair and blue eyed thing is very strange, because only Herman Goering was that in the Nazi leadership. Hitler was very dark haired and brown eyed, Goebbels - well, he was just a mess - and the others also had brown hair which usually means brownish eyes.)

Familes were given awards for having more and more children.

What were all the children for?
Boys were to be soldiers and workers, and girls were to make homes for their husbands.

Finally, there was to be an integration of class, religion AND politics in Germany. This was designed to unite (bring together) all the people in Germany and give them the overall sense that they were really ALL German and ALL the best in the world, whichever province they came from.

Those are the important aspects and concept of Volksgemeinschaft. 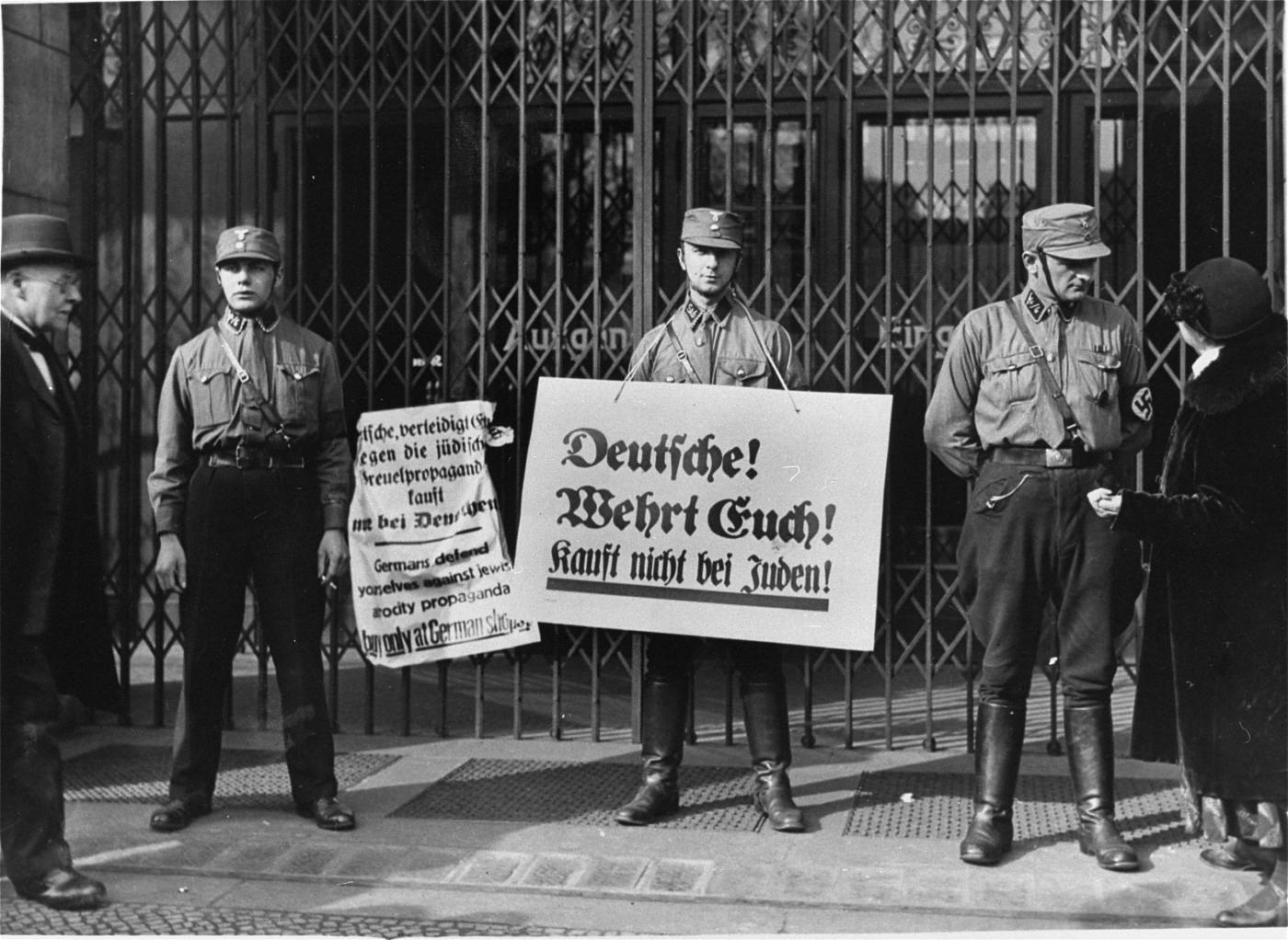